What I learned after trying out Laughter Yoga

What I learned after trying out Laughter Yoga

We take ourselves seriously. And why wouldn’t we? We’re human beings equipped with authentic experiences; most of which rooted in pain, success, nostalgia, and pride. When we’re kids, we’re taught that not taking ourselves seriously is what makes us kids, what makes us “immature”. Adults, “successful” ones, at least, were mostly depicted as a stone cold, suit-wearing populace. They were not to be messed with. Not to be laughed at.

Growing up, you try to convince yourself more and more that you are worth being called an “adult”. Jokes are less slapstick; loud laughter slowly starts to morph into subtle chuckles.

I took a Laughter Yoga Gold Coast class in college because I haven’t heard of it prior. I was more interested in its “yoga” aspect, being scared to join a yoga class because of my lack of flexibility. I thought it would be an excellent introduction to this very “adult” practice that I knew of—yoga—and felt that it would ease some tension by making me laugh along the way.

The naivete in me thought that Laughter Yoga could not be as silly as its name. I was wrong. It was silly. But it was so refreshingly silly, that everything else that came after it felt like the real joke. It reignited curiosity and playfulness in me, both of which tend to take a back seat when you study for your Bachelor of Science degree.

To be frank with you, it was quite smart to add Laughter Yoga in the college curriculum. College, much like work-life, becomes engrossed into the routine; and routine, while beneficial for one’s mental health, can also drain someone’s creativity. Taking a laughter yoga class, when you’re stuck inside your routine, becomes a mystery box gift from you to you.

Much like every exercise, you start laughter yoga by warming up. You will think warming up your laughter is unnecessary, since it is such a raw, human reaction, but you will need to. Laughter yoga is surprisingly tiring but in an old, childlike way. It breathes new life into your adulthood; it has the midas’ touch on your endorphins.

The warm-ups are ice-breakers; this is how you start letting go of your inhibitions. You force a chuckle, and then when you’re asked to look at each other in the eyes while laughing, you build up the courage to feel, to feel, like laughing. Your laughter builds up louder, and then next thing you know, you’re onto your second exercise, where you all act like renegade chickens.

Again, it is silly. But when you’re out there doing “normal” things, you need time to be silly. In a nutshell, laughter yoga taught me two important things:

(1) Making time for fun and making time for play, even as an adult, is beneficial. It wakes up my creativity, my imagination, and it grounds me in reality. It keeps me present.

(2) My ego needs grounding. It’s easy to feel like you’re better than the exercises you’re about to do, and you might feel a bit of guilt enjoying them at first, but trust me, your ego needs it. There’s something about laughing at nothing with people you barely know; it’s just overall humbling experience.

Beyond these, the most prominent net plus laughter yoga has given me is a chance to relearn fun. I have re-learned how to imagine, how to play, how to run around and laugh. Although it can be tiring, because laughing is a form of exercise, it is worth a few hours of your week, or a few minutes of your day.

So how about you join us in Laughter Yoga Gold Coast?

From the Gold Coast to Brisbane, people of all ages are using laughter yoga therapy to support their health and wellbeing.

Will we see you next time? Book your ticket now for our next class! 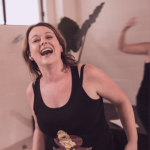 whoah this blog is magnificent i love studying your articles. Stay up the good work! You already know, lots of individuals are looking around for this info, you could help them greatly. Anette Gilburt Buskirk